June was probably the worst month for crypto, ever since its inception a little over a decade ago. In addition to the meltdown in the price of Bitcoin and other altcoins, we’ve also witnessed a bunch of bankruptcies and scandals which dominated the headlines throughout the month. In spite of all the carnage in the markets, the value of the underlying technology has never been more evident. This blog will explain what went wrong in the crypto industry and why it broke, as well as help you understand why crypto technology isn’t going away.

If we ignore other Macro aspects, such as the Fed hiking rates in order to tame inflation, the catalyst for the collapse in the crypto markets was the Terra ecosystem and its algorithmic stablecoin UST, which was backed by the LUNA coin. How was it supposed to back it up? When UST’s price got too high (higher than 1 dollar), the protocol incentivised users to burn LUNA and mint UST. Contrarily, when UST’s price got too low (below 1 dollar) the protocol incentivised users to burn UST and mint LUNA. This looks rather simple and resilient, so what went wrong? The algorithm didn’t break or anything, the problem was that once the stablecoin lost its dollar peg, the burning of UST was too slow to keep pace with the demand for excess UST to exit the system, because of the burn/mint limit. 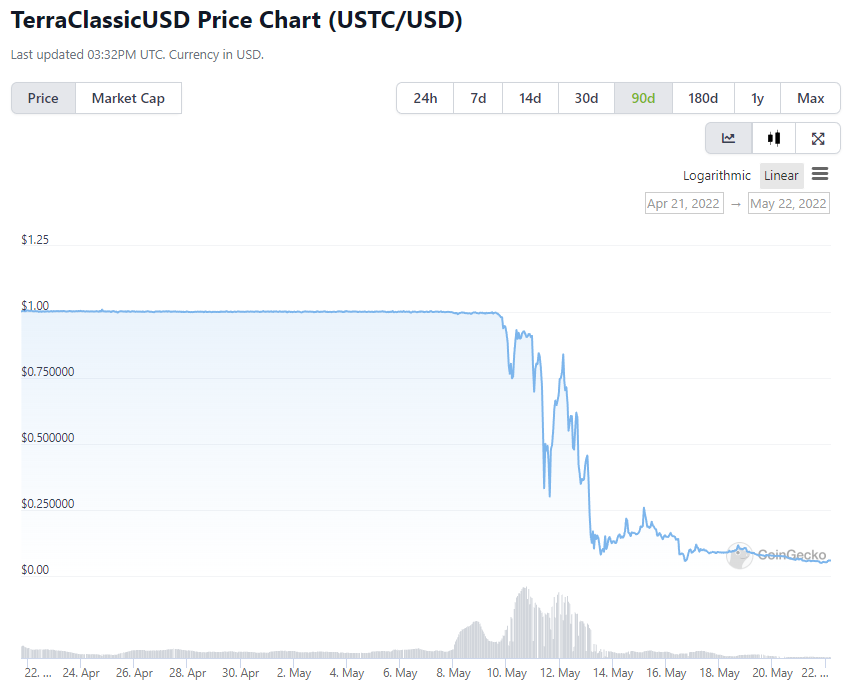 Since the crypto industry is extremely interconnected, a large portion of the industry that relied on the peg ended up with massive losses in their books. The largest example was Singapore based hedge fund Three Arrows Capital (3AC) who was running a highly leveraged strategy using UST. The company bet everything on prices going up and placed big orders around $30,000 and $40,000 betting that BTC would rebound. As Bitcoin got below $20,000, 3AC inevitably started missing margin calls from companies funding their trades, but it wasn’t enough to put the nail in their coffin. What really finished the 3AC, was their large positions in GBTC and staked Etherium (stETH). The Grayscale Bitcoin Trust position would bring the much needed capital if the trust got approved to an ETF, because of the huge discount it has been trading at, while stETH which has been trading at the same price as regular Ethereum began to diverge and trade at a discount.

Eventually, it got obvious that the Three Arrows Capital won’t be able to close their positions in GBTC and stETH in green, so whispers of insolvency got louder and louder. Liquidation of collateral led to more loans going bad which led to further liquidation of collateral. Once the dust settled Celsius, Voyager, Babel Finance and a bunch of other smaller crypto lenders were forced to limit or even totally halt any withdrawals.

What Can We Learn From it?

While numerous crypto market participants experienced lots of pain investing in crypto banks they’ve trusted, there is always a lesson to be learned so the same mistakes won’t get repeated. The real lesson is to know the counterparty you’re dealing with and evaluate the risk accordingly. It has always been clear to anyone willing to dig a little deeper that many of these entities were either involved in speculative investments themselves or lending out funds to other crypto hedge funds (or both). Unfortunately, even investors who were sceptical at the beginning, ignored the risk until all hell broke loose.

We’ve now gotten confirmation that no one is too big to fail in crypto. Terra LUNA’s peak market capitalization was over 36 billion dollars, yet it got almost completely wiped out in a matter of days. Three Arrows Capital was the biggest crypto hedge fund, yet it was forced to declare bankruptcy and left investors that trusted them holding an empty bag. The lesson is that there is no such thing as a low-risk investment. Since the crypto market is still in its developing stage under minimal regulation, there is no third party that will bail out your investment, or inform you about all of the risk you’re taking on your shoulders. From now on, depositing your crypto funds into a lending platform won’t ever be seen as a low risk move again.

Opportunity out of Crisis

It’s important to note that throughout all the turmoil, major protocols functioned flawlessly. When it comes to Terra LUNA, the problem was in how it was designed to work, not taking into account that such depeg could happen. The market has successfully eliminated a poorly designed project, which in the end will make the whole ecosystem more secure, efficient and robust.

Taking into account that many of these protocols haven’t been properly stress-tested before, they’ve performed extremely well. What helped them be so resilient was the fact that DeFi loans on major platforms are over-collateralized, which eliminates any potential losses from bad loans.

Since DeFi protocols stood the test so brilliantly while centralized entities got people that trusted them with their money burnt, we can on the one hand learn that companies offering access to DeFi to customers who hand over their Crypto are risky (which can help us make more informed decisions in the future), while on the other hand undercollateralized lenders are significantly more risky than overcollateralized lenders (investors should demand a much higher yield to compensate for extra risk).

During the recent meltdown, it was digital assets’ prices that crashed, not their networks. For instance, the Bitcoin was down almost 75% from its peak at its lowest point about a month ago, meanwhile blocks kept getting mined and transactions kept moving. If you held your Bitcoins in your non-custodial wallet, your coins have been SAFU throughout the whole turmoil. They’re still waiting for you, so you can make a transaction and send value nearly instantly to anyone in the world without the permission of any third party entities. Even if your counterparty at the other side of the transaction lives in a country whose banking system has collapsed, Bitcoin gives you the ability to exchange value.

The prices of coins and tokens in the crypto space might have plunged to unprecedented levels, but the value of the underlying technology isn’t going anywhere. Crypto is here to stay!