Last week we released an article that covered basically the whole history of money. It starts by describing the barter system and its inefficiencies explaining why gold and silver proved to be the most appropriate medium of exchange, which made them the most widely used forms of money throughout history across numerous different civilisations. It continues by illustrating how governments and elites fooled the public into believing that the Federal Reserve is in their best interest, although it basically helps transfer wealth from the poor and middle class to the government (since inflation is basically a hidden tax) and elites. The article ends with a turning point that marks the end of (at least partly) backed money - the start of the fiat standard in the 1970s, when president Nixon ‘temporarily’ closed the gold window.

As promised, today we will discuss the potential emergence of a Bitcoin standard as a response to the unfair monetary system that is in place today. This would be a new type of monetary system, where Bitcoin was used as the primary means of exchanging value and the primary store of value, similar to the way that the gold standard used gold for these purposes. If you’re ready to explore possibilities such a system would bring about, I suggest we get right into it!

Is the Bitcoin standard even possible?

Implementing the Bitcoin standard implies Bitcoin acting as money. Consequently Bitcoin would first need to have the three properties of money, which are medium of exchange, store of value and unit of account. Without a doubt Bitcoin has the potential to fulfill all three roles.

Firstly, Bitcoin is a viable alternative to traditional payment methods, as it can easily be transferred between individuals or businesses in a relatively fast, secure and inexpensive way. Here, it is important to note that Bitcoin lags behind the current banking system when it comes to scalability, since it wasn’t originally designed to be scalable, but rather with the intention of creating a robust decentralized peer-to-peer payment system. Luckily, scalability can be achieved on the second layer and a solution is already in place. It is called Lightning network and we’ve already covered it in one of our previous articles, so make sure you check it out if you want to learn more about it. However, Bitcoin actually doesn’t need to fulfill this property (medium of exchange) any better than paper money, as a Bitcoin standard doesn’t necessarily imply that people would transact directly with Bitcoins (more details coming in the next section).

Since the supply of Bitcoin is limited to 21 million by the underlying protocol, it has the potential to hold its value over time. Because the market for Bitcoin is still relatively small and is not as well-established as the markets for traditional currencies, its price can fluctuate greatly. Nevertheless, many experts agree that as the market for Bitcoin matures, its price will become less volatile, because of the increased adoption and use of the currency (as more people and businesses begin to use Bitcoin for everyday transactions) and the development of new technologies and infrastructure to support the use of Bitcoin.

Obviously Bitcoin can also act as a unit of account. This just means it is being used to denominate the value of goods and services. Clearly, prices can be expressed in terms of Bitcoin, just as they are currently expressed in fiat currencies like dollars or euros, as the government arbitrarily demands.

In a strict sense, the Bitcoin standard would suggest that all transactions are conducted using Bitcoin, but as already stated in the prior paragraph, that isn’t usually the case when referring to it. Normally, the Bitcoin standard doesn’t necessarily imply that people would transact directly with Bitcoins (or Satoshis), or that traditional fiat currencies would be replaced by Bitcoin. In contrast, it usually refers to a monetary system in which Bitcoin acts as a reserve currency.

Under such a scenario a Bitcoin standard would involve the use of traditional currencies (such as dollar or euro), but with the added feature of being backed by a certain amount of Bitcoin. In this scenario, traditional currencies would continue to be used for everyday transactions, but their value would be pegged to the value of Bitcoin. This would effectively make Bitcoin a reserve currency, similar to gold in a gold standard, and would give it a more prominent role in the global monetary system.

Under a Bitcoin standard, governments would not have the ability to directly inflate the money supply in the same way that they can with fiat currencies. Since Bitcoin is a decentralized digital currency, its supply is determined by the underlying algorithm that governs the creation of new coins and cannot be increased at the discretion of a central authority. This means that the supply of Bitcoins would increase at a slower rate over time, and would ultimately reach a maximum limit of 21 million BTCs.

That doesn’t mean that governments would disappear. It is very likely that they could still potentially affect the supply and demand of Bitcoins in other ways. For example, they could implement policies that promote or discourage the use of Bitcoin, or they could use their own holdings of the digital currency to influence its value. However, the ability of governments to directly inflate the money supply would be greatly reduced under any version of a Bitcoin standard.

In case of the Bitcoin standard, which would involve the use of traditional currencies, such as dollars or euros, but with the added feature of being pegged to the value of Bitcoin, central banks would still exist, but their role would be somewhat different than in a traditional monetary system. They would still be responsible for managing the supply of money, but their ability to control the money supply would be limited by the underlying value of Bitcoin. 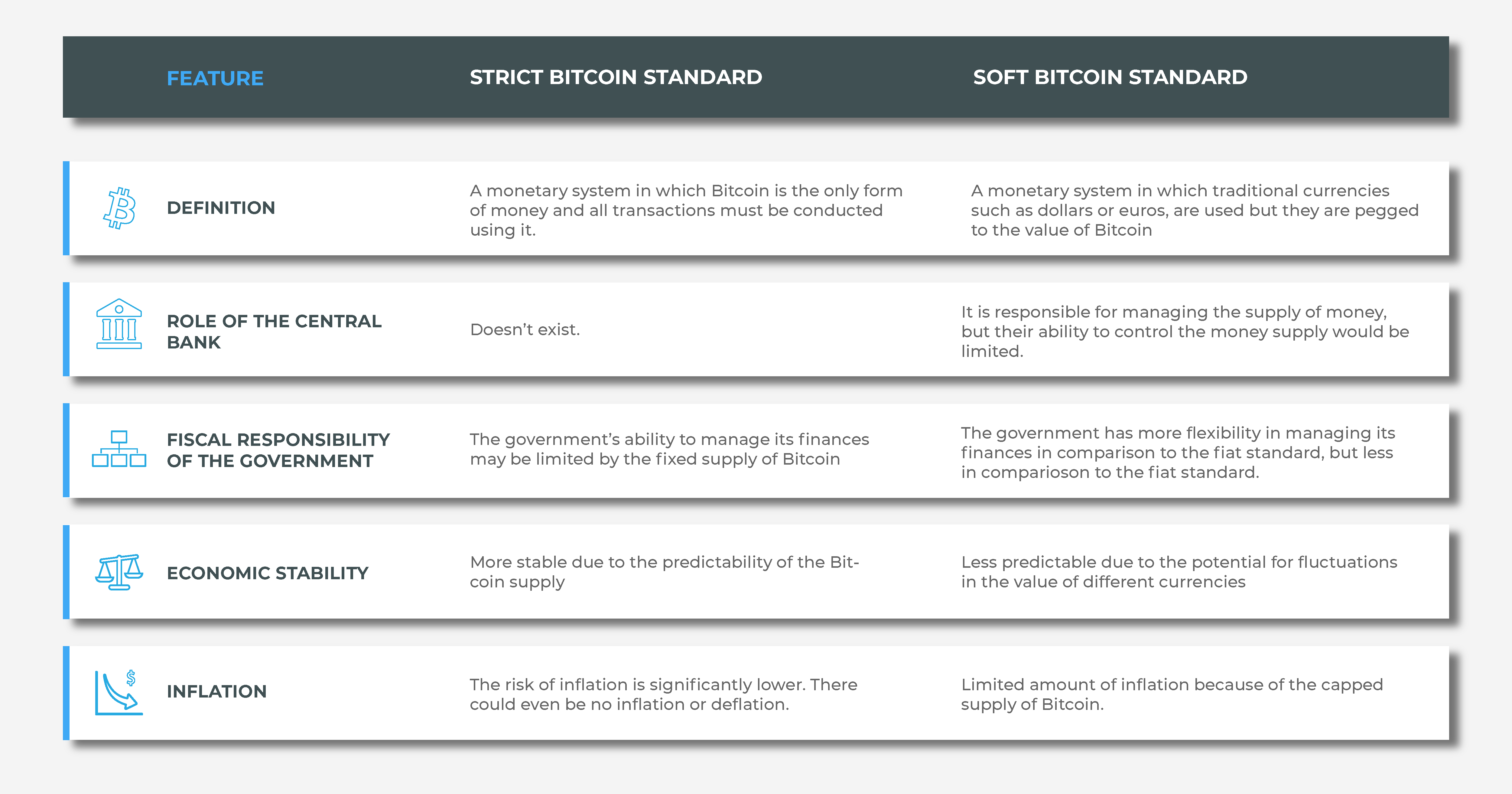 It is all about freedom

As the phrase ‘the freer the market, the freer the people’ suggests, the better option is the one that eliminates central authorities (and their central planning) and consequently gives power back to the people. The more freedom, the better. In order to achieve maximum freedom, and therefore prosperity, central banks need to be abolished completely.