The metaverse has been a hot topic lately, which can be partly attributed to Facebook rebranding to Meta. This catalyst created a domino effect, as Microsoft also announced its launch into the metaverse space, not to mention another 160+ companies steering in the same direction.

Let ‘s first look at the roots of the term metaverse. The idea itself isn’t new, as it has already been mentioned in Neal Stephenson’s novel Snow Crash almost 30 years ago in which he envisioned a 3D virtual world in which people (or rather their avatars) could interact with each other.

If you’re a newbie in the field, you might be wondering what the term metaverse means. As with many big visions of the future, the word doesn’t have a clear definition yet. Many people refer to it as the next generation of the internet or simply a part of Web3.0, as it is supposed to completely revolutionize the internet as we know it today.

Jon Radoff, an American game designer focused on online communities, internet media and computer games explains the metaverse by describing the seven layers it consists of according to his definition. The layers are: experience, discovery, creator economy, spatial computing, decentralization, human interface and infrastructure at the very core of it. 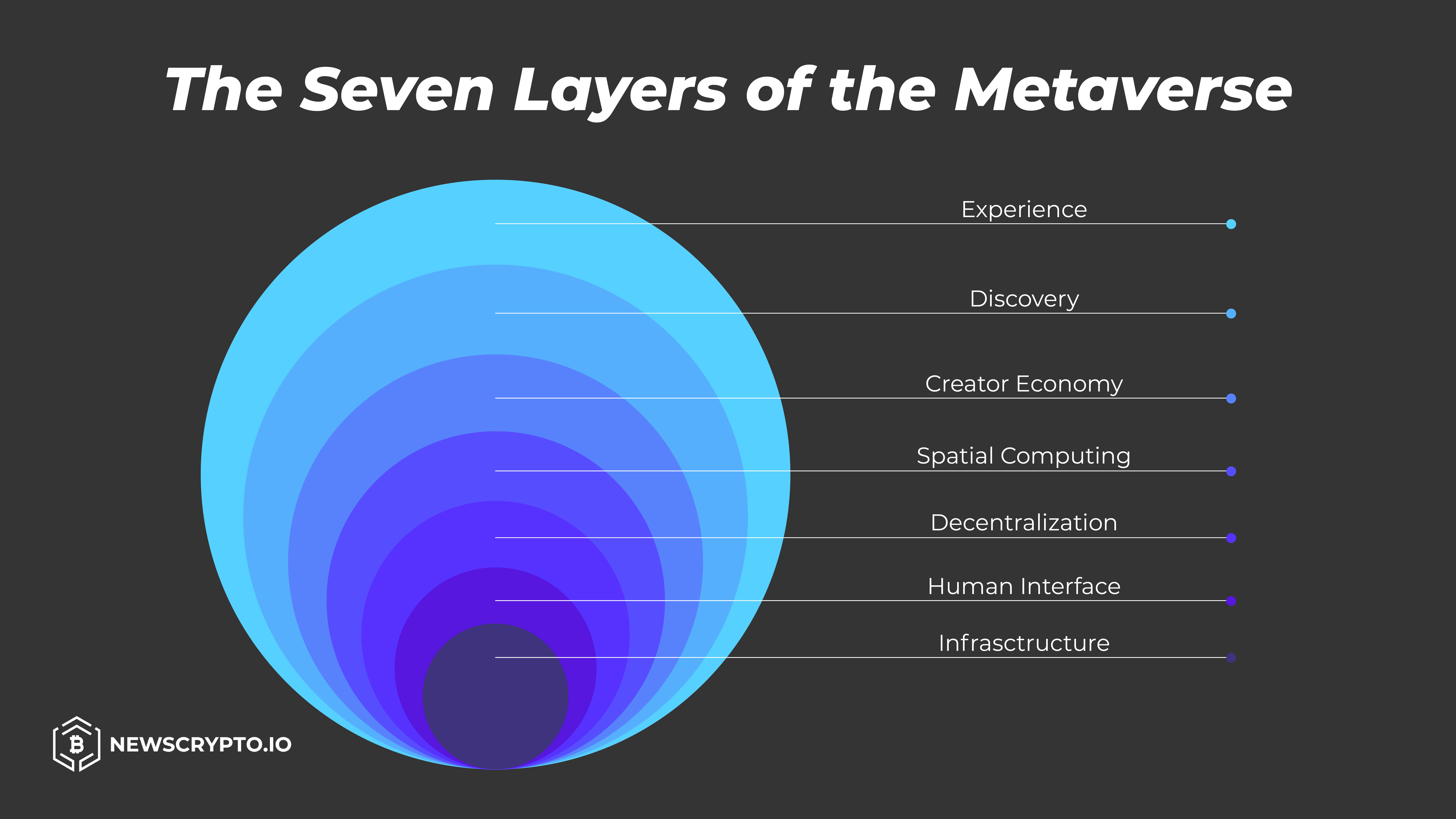 When it comes to experience, you have to think of the metaverse as a transition from observing virtual worlds to being able to interact with and experience them. This can have multiple implications in almost every existing industry. Everything from enhancing online shopping experience by virtual and augmented reality (you might soon be able to virtually walk through stores and purchase items on display), experiencing travelling through the virtual world (for example exploring heritage sites through VR), learning and educating in the interactive classroom held in VR (would come in handy in these Covid times), to simulating gadgets and vehicles in the virtual space and much more.

We might transition to a world where things are initially constructed and tested in the virtual space and only then the plans get uploaded to the real factory where actual products get built.

Content marketplaces will become an alternative to application marketplaces as a means of discovery. It shifts focus from discovering what people like to discovering what they’re doing right now, which is highly relevant in a metaverse, where so much of the value will come from interacting with friends through shared experiences.

In regard to the creator economy we’re now living in an era where creativity is limited by engineering capacity. Soon we’ll transition into the Creator era, which will enable anyone to earn a living or build a business around an audience, unconstrained by the high technological barriers that existed in the past.

Spatial computing mostly relates to designing systems that push through traditional boundaries of observing action through a screen and keyboard, giving the ability to interact with the interface and consequently other users.

Importantly, the metaverse needs to be as decentralized as possible, since its aim is to provide a distributed and open environment without a central authority to control it. Users of such systems share the same permissions and interact with each other via decentralized digital identities, which can be connected to their wallet addresses.

As far as human interface is concerned, the rise of computational power, further miniaturization and accessibility of sensors, as well as lower and lower latencies make the smartphone a potential interface for more and more applications and experiences from the metaverse. Moreover, we’re already witnessing the evolution of different gadgets that will also serve as intermediaries among users and metaverse.

Lastly, when it comes to infrastructure, the evolution of chips, networks, IoT, sensors and computational power is making sure the metaverse will take off this time, despite its roots dating back almost 30 years. The infrastructure to scale virtual reality to massive scale is only now emerging and the recent Covid situation has only increased its pace of development.

To sum it up, let’s just point out that the world is still in the early stages of metaverse development. According to Bloomberg, the total market size of the metaverse is expected to grow to 800 billion dollars in the next three years, which means that investing in some crypto projects focused on the metaverse could present an amazing opportunity, but more on that in one of the following articles.

* Check our first video on Metaverse below: