What is inflation and how to understand it?

Google searches on ‘inflation’ already surged in 2021 and have shown no signs of slowing down.

Consumers not only consistently get hotter than expected inflation numbers every time they get reported, but can also sense that their money is losing value every time they go shopping. It’s obvious that increased prices have become a major concern for the public, but what is the source of it and what can be done about it?

If you look up the word 'inflation' in a modern financial dictionary, the term is defined as a ‘rise in prices across a wide range of goods and services’ or even a ‘loss in the purchasing power of money’. While on the one hand this definition is good enough to provide an insight into the result that you feel as a customer, on the other hand it doesn’t give any information about the very source that causes it.

In order to find out what causes it, one has to look for the original definition. Don’t worry you don’t have to get to the nearest library and seek a half of a century old dictionary, as it will be one of the many fascinating insights you’ll gain if you keep reading this blog.

It is going to cover what inflation actually is, what causes it, why professional analysts think high inflation should persist and even increase, as well as the implications it can have for the crypto sphere. If you’re ready to gain a completely new insight into the financial term that has surged in Google search popularity recently, let’s dive right into it. 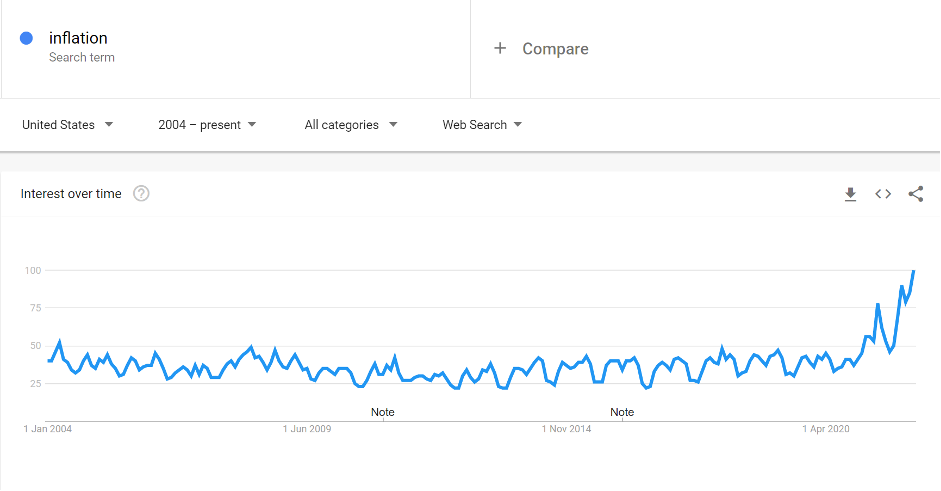 “Inflation is always and everywhere a monetary phenomenon in the sense that it is and can be produced only by a more rapid increase in the quantity of money than in output.” A quote by famous monetary economist Milton Friedman helps us understand what inflation actually is.

At the first glance the statement is obvious, as the Inflation, by modern definition is described as  ‘rising prices’ or in other words ‘money losing its purchasing power’ and therefore, is a monetary phenomenon. But Friedman meant much more. He argued that one could not find inflation (modern definition of ‘steady and sustained rise in prices’) anywhere in the world that was not caused by a prior increase in the supply of money or in the growth rate of the supply of money.

You could come to the same conclusion if you looked for a definition of a word in a 1960s dictionary. Being described as ‘Increase in the amount of money and credit causing advances in the price levels’, it points out not only to the cause, but also to the mere effect of the policy. If you were even more curious and you picked up an even older dictionary you would find the original definition. which is ‘Expansion of the supply of money and credit’.

Government has suited the definition to suit its own purpose. They want to claim that inflation is raising prices, because it allows them to shift blame onto greedy businesses, who are gauging the customer. How? Since the government and the central bank that issues the official currency work hand in hand with one another, they’re the only one expanding the supply of money.

This is common sense to the majority of people who are increasingly frequently searching the term in their browser machines. Having been introduced to the original definition, they would all point their fingers to the government, but since they are presented with the modified definition they’re easily deceived.

Why is it worse than you think?

As already mentioned, today inflation is defined as a rise in prices. Usually when economists talk about inflation, they refer to the rise in prices that consumers have to pay for goods and services. In the United States, the de facto measure of inflation is the Consumer Price Index (CPI).

The CPI is measured by the Bureau of Labor Statistics that takes a basket of goods and services, assigns weights to them to approximate the spending of an average consumer, and then tries to see what the same goods cost in US dollars at different points in time.

Over the years, the methodology used to calculate the CPI has undergone numerous revisions in order to lower the number it states. The new methodology takes into account changes in the quality of goods, which means that they can claim that particular increase in price is justifiable by good’s increase in quality, decreasing the inflation number. Moreover, BLS recalculates CPI by using substitution, meaning that the change in purchases by consumers in response to price changes, changes the relative weighting of the goods in the basket.

The upper picture shows the current BLS weights. Note that the third of a CPI consists of Owner Equivalent Rent (OER), which is almost not a statistic, but rather a made-up number. Generally, OER is obtained through surveys by BLS.

They ask homeowners the following question: "If someone were to rent your home today, how much do you think it would rent for monthly, unfurnished and without utilities?" While rents and real estate have almost doubled in particular areas, OER is still anchored at about 3%, which comes handy if you want to hide from voters that their standards of living are deteriorating.

On top of that businesses are getting more and more innovative and are using numerous alternatives to traditional price hikes, which don’t affect the CPI. For example companies might shrink the size or quantity, or even sometimes reformulate or reduce quality instead of increasing prices. On top of that, businesses may add all sorts of additional fees to the service they’re offering, in order to hide the growth in prices.

Why are prices going to keep rising?

Another index that calculates selling prices from domestic production over time is Producer Price Index (PPI). What differentiates the PPI from the CPI is that it measures costs from the viewpoint of industries that make the products, while the CPI measures prices from the perspective of consumers.

Year over year CPI in January was 7,5%, whereas the PPI rose for 9,7% in the same time period. This means that there has been a divergence between the prices producers have  been paying for goods and services in comparison to consumers. It seems that many businesses have mistakenly believed Fed that inflation was transitory and therefore rather lowered their margins instead of delivering price hikes, thinking they’ll be lowered temporarily.

Businesses have been operating with vastly decreased margins for 13 months straight and they’ll soon have to pass up the costs to the final consumer in order to secure the profit margins necessary to not only keep up with expenses, but also be able to satisfy investors. 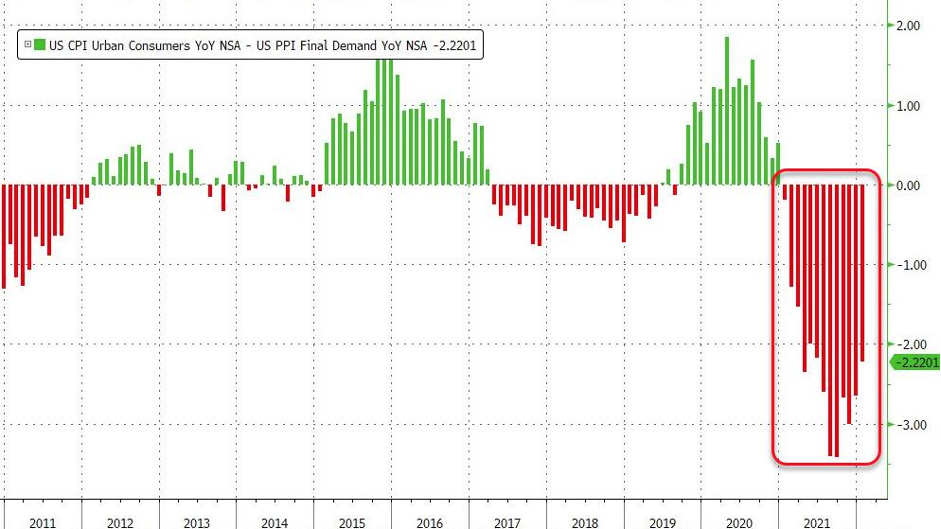 Why are problems with fiat currencies good for crypto?

If government issued fiat currencies are going to keep losing value with such magnitude(and it seems like that is the case), more and more people are going to look for ways to preserve their purchasing power. This means that money is going to flow into assets that will rise with inflation.

Even though, traditionally, commodities such as gold and silver, or value stocks that pay high dividends, which are backed by strong earnings have been the most desired options, we’re witnessing that an increasing share of that money pool is flowing into digital assets.

It seems like the inflation problem could be a part of a solution, as millions of people are actually forced to look for a solution and end up in the crypto world, detaching (at least partially) from the traditional, corrupt, centrally-planned monetary system.