As Putin announced a ‘special military operation’ in Ukraine and noted that Russia will respond immediately to anyone daring to intervene, imposing on them consequences never experienced before in their history, global markets started pricing in all of the possible devastating outcomes it could lead to.

US equity futures rapidly extended losses from the day session, pushing NASDAQ futures into an official bear market territory (down over 20% from its previous high). Meanwhile S&P 500 is approaching the bear market area, as it’s currently trading deep in the correction territory, around 15% below the previous all-time high. The leader of all major indexes on a way downward is RUSSELL 2000, which sank over 22% from the November ATH.

The crypto market was hit even harder. In a response to the recent uncertainty, Bitcoin dropped around 8% bottoming (at least temporarily) just below $35,000. Other cryptocurrencies followed suit, as the majority of mid-cap or lower cap projects experienced 15-20% declines, hitting multiple month lows. The drop wiped out unbelivable $1.58 trillions from the crypto market cap.

Why didn’t Bitcoin rise in times of uncertainty? What implications can it have for crypto in the near and distant future? Can destabilisation benefit crypto adoption?

These are questions that will be answered in this article, so make sure you read until the end, so you don’t miss a thing! Are you ready to dive right into it? If your answer was yes, then let’s get right into it!

Why didn’t Bitcoin act as a safe haven and rise in times of uncertainty?

Since Bitcoin is considered an inflation hedge many people expected it to show resilience at a time of crisis and rise amid tensions. CEO of the crypto exchange FTX Sam Bankman-Fried provided an explanation for sell-off in crypto.

He believes that it should have been obvious that war will result in people having less ‘free’ cash, basically selling BTC along with their stocks. Bankman-Fried argues that some of the cashing out could be in order to pay for the war. Additionally, he points out that there has been a very high correlation between crypto and equities in the anticipation of a tight monetary policy. In contrast to a loose monetary policy that benefits assets (also digital) as they rise with inflation, tighter monetary policy that results in less liquidity, hurts stocks, as well as equities.

Can crypto be a cure for the common man in Eastern Europe?

It’s important to note that the currency destabilisation in Eastern Europe might cause investors looking for profits, as well as people looking to hedge against inflation, to look for alternatives, which could make BTC an obvious choice.

Particularly the ordinary people of Russia might be better off moving their rubles into digital currencies. The ruble hit a record low of 89.60 and it looks like it’s about to fall off the cliff. Even though it managed to gain back 3.8% from the low, assuming that US, EU and UK will impose even harsher sanctions on Russia, one can expect the selling pressure on Russian Ruble to continue, which signals that the recent all-time lows against USD or EUR will sooner or later be broken again.

I think most of us can agree that even if ‘physical’ war between Russia and West ceases right now, tensions are to remain higher for longer, putting the ruble under pressure in any scenario.

Can Russia use crypto to blunt the force of sanctions?

When the US prohibited Americans from doing business with Russian banks, oil and gas companies back in 2014, after the country’s invasion of Crimea, the hit to Russia’s economy was significant and immediate. Economists estimated that sanctions imposed by Western nations cost Russia astonishing $50 billion per year.

Since then, we’ve witnessed a huge boom in cryptocurrencies, which is bad news for enforcers of sanctions and good news for Russia.

In the past few days, the West imposed fresh sanctions on Russia over the conflict in Ukraine with the aim to thwart its access to foreign capital. Since the Russians will be forced to make deals with anyone and under any circumstances in order to mitigate its effect, it should come as no surprise that those entities (people and businesses that will be on a ‘black list’) will probably use digital currencies to bypass the control points that governments rely on (banks, which need to comply with regulation). Since crypto has a decentralised structure, there are no bank-like entities, which would be able to block deal executions.

What does the future bring for the markets?

Goldman Sachs Global Investment Research data suggests that the market is still relatively bullish. The bank noted that short positions ( so called bearish bets) against many stocks remain in an “extremely low” territory, taking into account the geopolitical situation. It indicates that investors are waiting for the right opportunity to start buying again instead of looking for a rally to sell into. 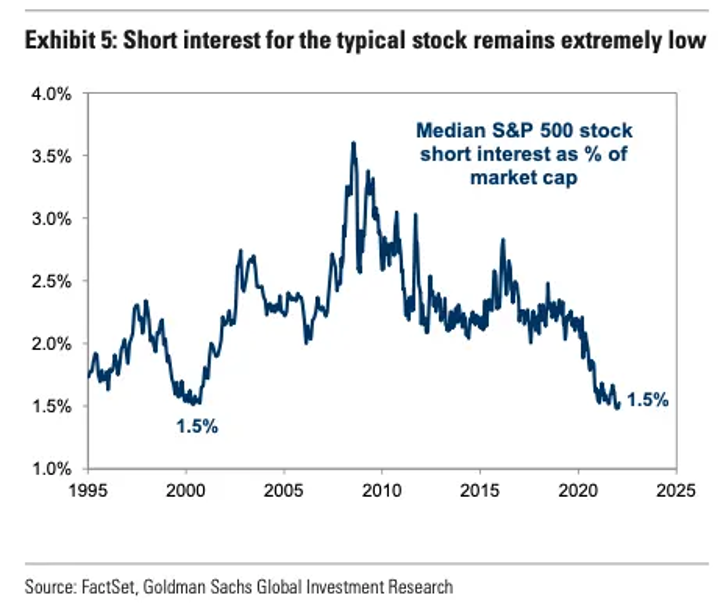 Most analysts agree that geopolitics tends to exert a powerful influence on a market in the short term, but have a relatively limited influence on market prices over time. Consequently, both equities and crypto may be poised for more red ink in the near future. Contrarily, in the long run the invasion shouldn’t play an important role.

It’s crucial to take a look at the next resistance and support levels. Since times are very uncertain, we can also expect a high degree of volatility. In case downward pressure continues Bitcoin can fall all the way to the $28,735 level, which served as a key support level, after the crypto crash in May last year.

It’s important to note that there is quite strong support a little higher around $30,000, which means we could witness a reversal before the price reaches last summer’s lows, especially if the current geopolitical crisis de-escalates (which is what we all wish for).