Having almost reached $21,500 level on the previous Saturday, Bitcoin has been bleeding for the past few days. While digital gold is down about 30% in the last five days, many altcoins are down over 50% in the same time period. The biggest meltdown happened in FTX exchange token FTT, which has been trading around 22 dollars price on Tuesday and is now sitting just above $1.6 handle (take a look at the picture below). 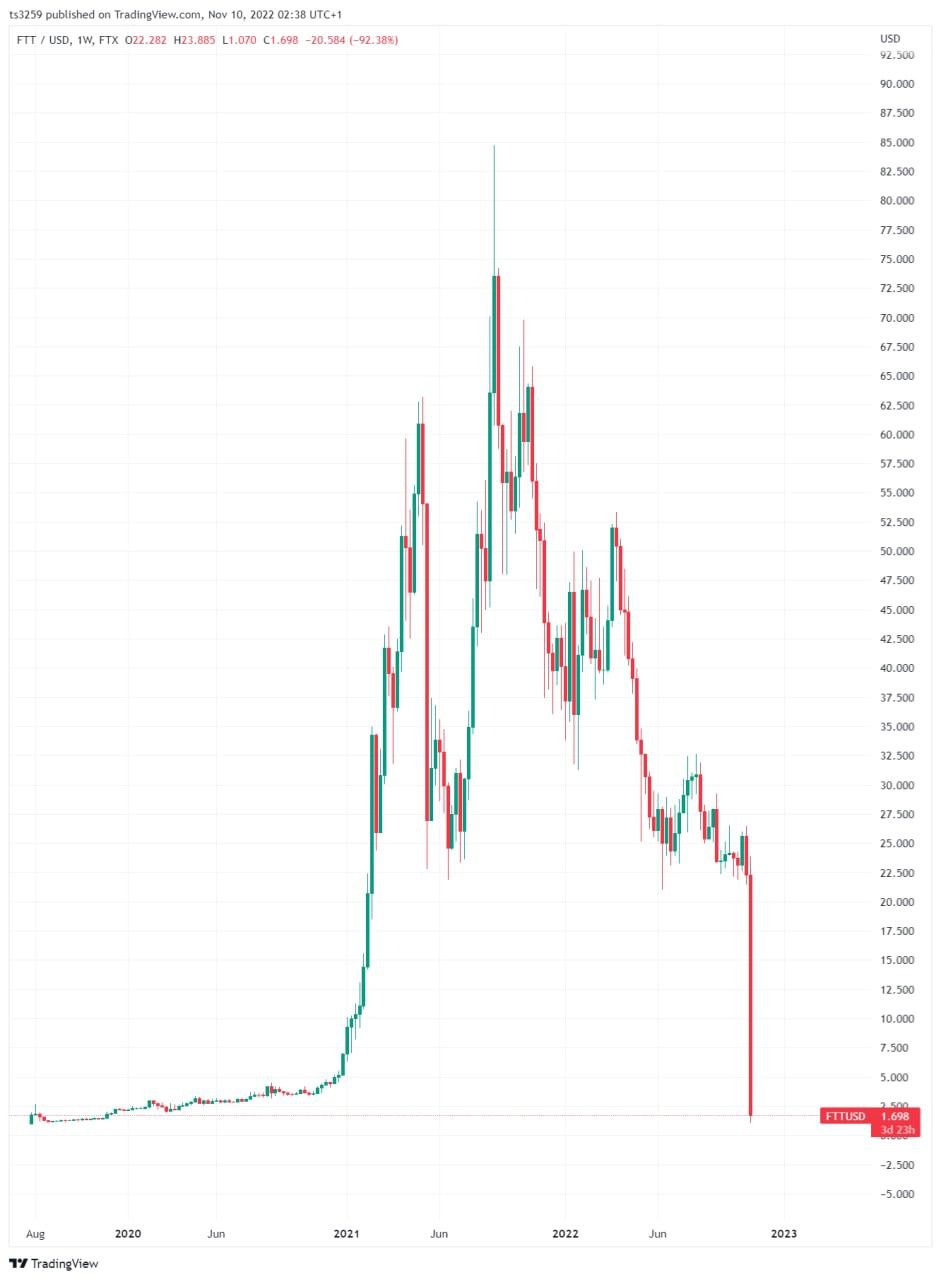 Although crypto markets are very volatile, moves of such magnitude only happen once in a blue moon. The latest such event is probably the fall of Luna Terra and its brother stablecoin UST, which happened a little over a year ago and had tremendous negative consequences for the whole crypto community. As if losing 94% of his net worth overnight isn’t enough, it is very probable that Sam Bankman-Fried is about to be criminally prosecuted just like Do Kwon (founder of Terra Labs) for recklessly handling client funds. At the end of the day, with the benefit of hindsight, such a gloomy outcome was almost inevitable for FTX, given how they (used to) operate.

How did the drama between Binance and FTX begin?

Just over a week ago Coindesk released an article that suggested FTX rests on some questionable foundations. The report outlined some critical financial details from Alameda Research (Sam Bank-Friedman’s crypto hedge fund). Having obtained a copy of their balance sheet from the second quarter, they’ve shared it with their readers.

The firm’s largest asset was FTT (FTX token issued by FTX exchange), which represented roughly a third of their total assets and equal to 88% of net equity. Given that 93% of the total tokens amount is held by only 10 addresses, a very low number of addresses actively transacting in FTT tokens, low trading volume and low overall demand for tokens, these holdings are highly illiquid. Likewise, a few smaller holdings of Alameda Research share similar characteristics. While this is already problematic for obvious reasons, the real red flag arises when you find out Alameda’s balance sheet consists of $8 billion in loans, $2.2 billion of which are collateralized with FTT token.

This caused some analysts to predict future insolvency to the hedge fund. ‘Alameda will never be able to cash in a significant portion of FTT to pay back its debts. There are few buyers, and the largest buyer appears to be the very company which Alameda is most closely tied to [...] the fair market value of their FTT in the event of large sales would rapidly approach $0.’ wrote market analyst Mike Burgersburg.

How did the market react?

It seems CZ (Binance CEO) recognized the potential danger as well and therefore decided it is in Binance’s best interest to liquidate all of the remaining FTT holdings on their balance sheet (Binance was an early investor in FTX that got compensated with hundreds of millions of FTT tokens when they exited FTX equity). This sparked selling of FTT tokens and quite the capital flight from FTX. Why? People got scared that the FTT price will plunge if such a big seller decides to sell their bags, while others started doubting their funds are SAFU in SBF’s hands.

Sam Bankman-Fried responded to events by saying that a competitor is trying to go after them with false rumours, assuring everybody that ‘FTX is fine. Assets are fine.’ He continued by noting that ‘FTX has enough to cover all client holdings. We don't invest client assets (even in treasuries). We have been processing all withdrawals, and will continue to be.’ Unfortunately, it turned out to be a lie, as FTX eventually stopped processing withdrawal requests, as they ran into liquidity issues. Eventually SBF told investors that FTX had a shortfall of $8 billion and was seeking emergency liquidity, as they would likely go bankrupt without more capital.

The contagion from the FTX debacle quickly spilled over into other cryptos. Markets only for a quick relief when news came out on Tuesday that Binance will rescue FTX from ‘significant liquidity crunch’ in exchange for ownership. As CZ wrote (picture below) Binance signed a non-binding LOI, meaning they could pull out from the deal at any time, after initial due diligence. Having taken a look into FTX s financials Binance has confirmed in a statement on Twitter that it will walk away from the FTX rescue deal. This sparked even more panic in the markets and Bitcoin went sub $16,000 for the first time since November 2020. 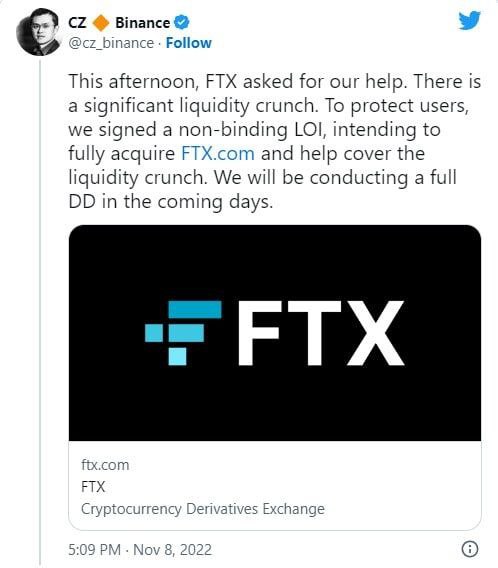 It seems like crypto investors are scared this could be the second crypto ‘Lehman moment’ of 2022. They are afraid crypto space could witness domino effect, where insolvency of one crypto entity could result in insolvency of many others, et cetera. The first obvious potential dominos in this case could be FTX investors whose money in FTX is now gone. The biggest figures that include BlackRock, Ontario Teachers' Pension Plan, Sequoia, Paradigm, Tiger Global, SoftBank, Circle, Ribbit Capital, Alan Howard, Multicoin Capital, and VanEck can be obtained from the picture below. 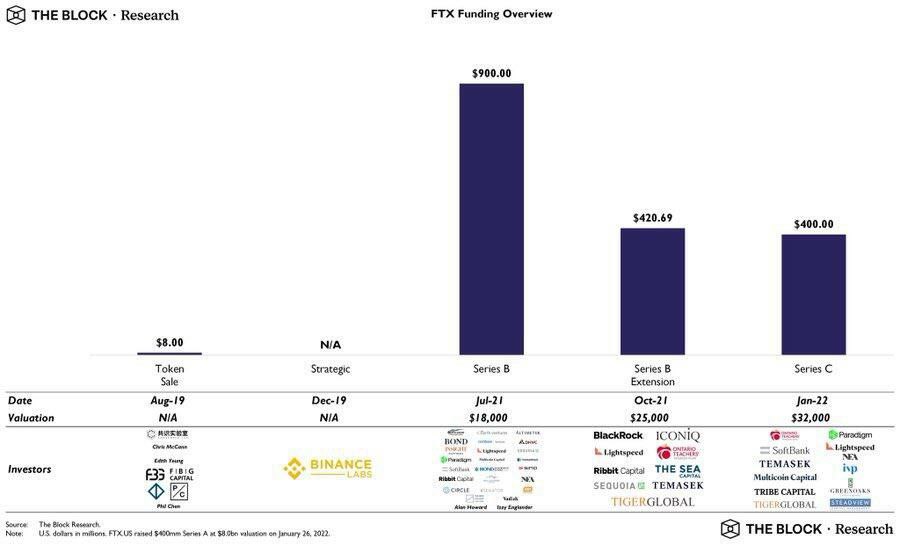 Of course there are many other black swans which may or may not happen as a result of this ‘crypto crisis’. Chances of such an event taking place are definitely not negligible, so we'll see how things unfold, but in any case, it’s always important to stay calm and collected and be very careful with the security of your funds. These things happen at times - but it’s those who make it through the most difficult times that will prosper when the market turns around. 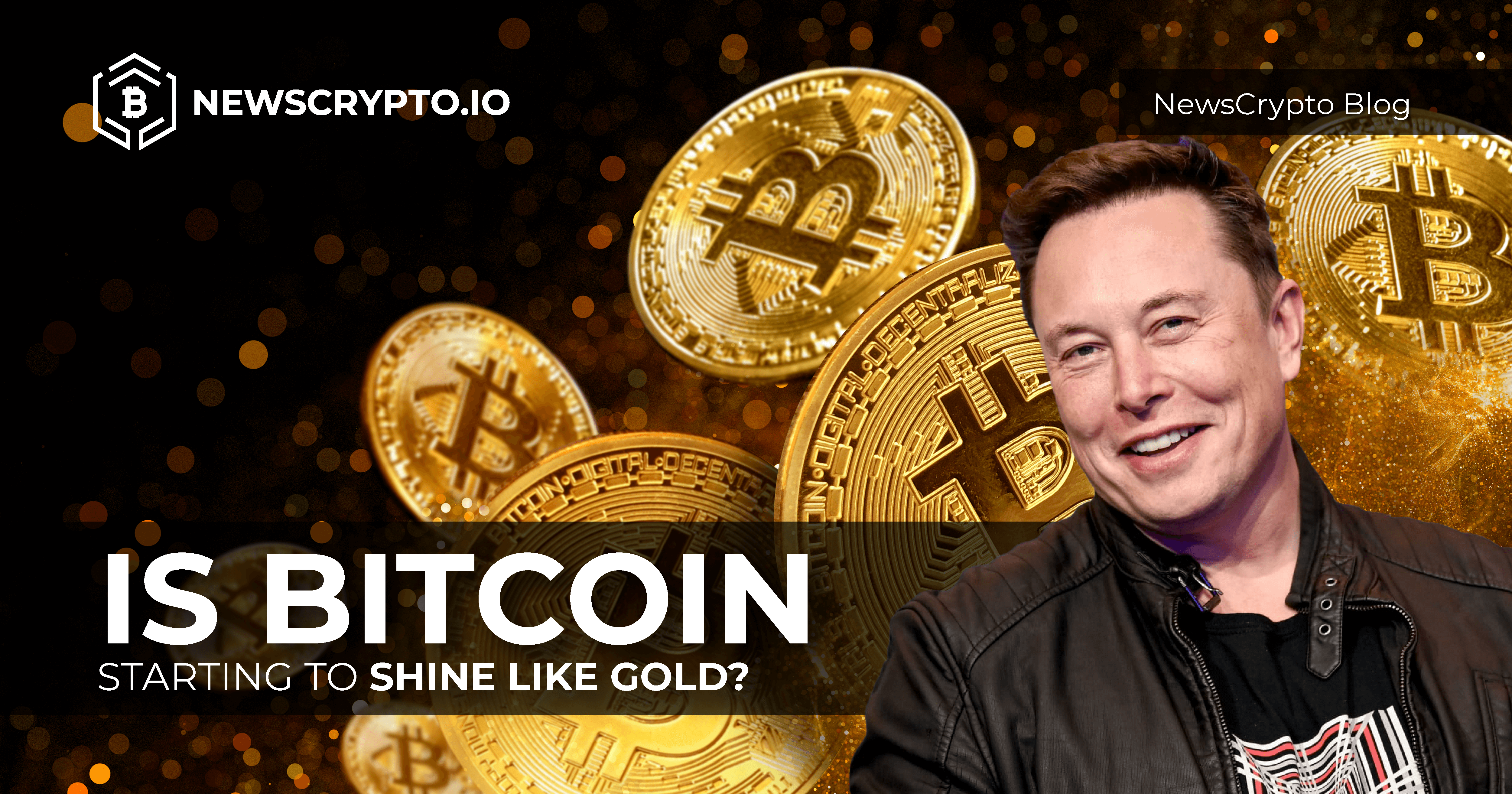 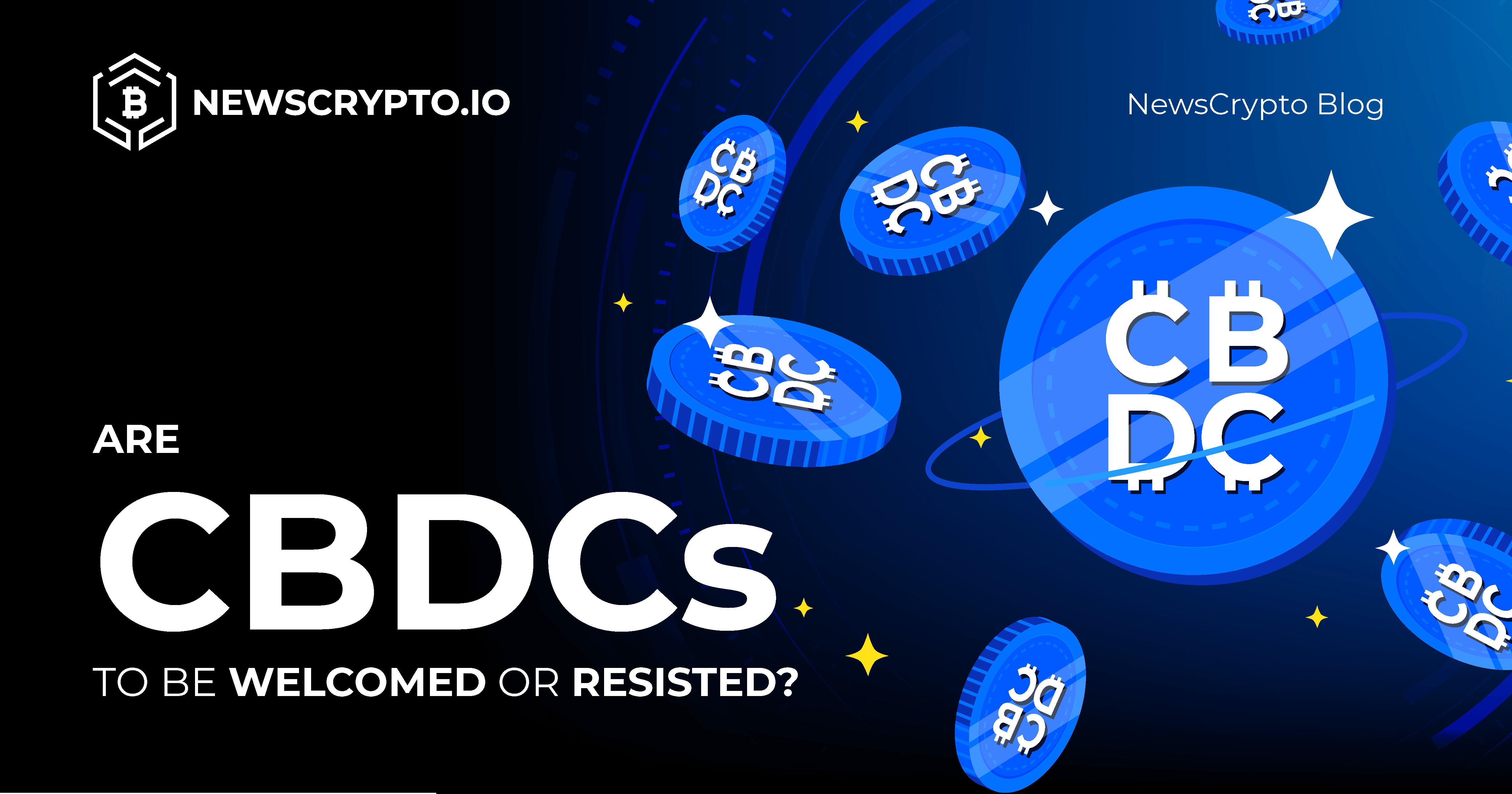 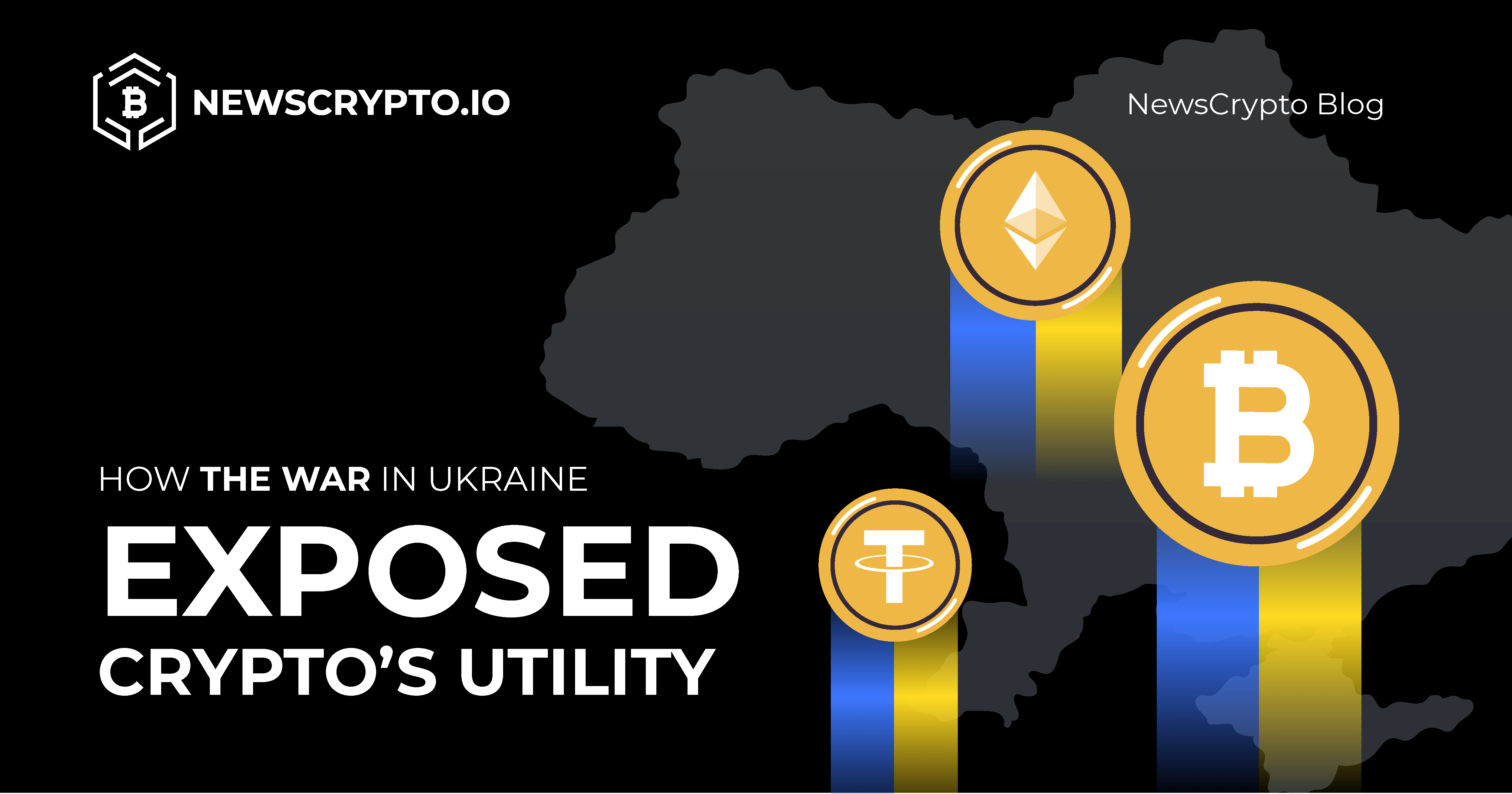