Can a recession kill crypto?

During mid-November last year Goldman released their 2022 stock forecasts. Their price target for S&P 500 was laid at 5100 points, saying that profit growth will continue to drive gains. In mid-March a year-end price target was taken down to 4700, but even more importantly Goldman’s David Kostin raised the odds of a recession, giving it a 40% likelihood. Last weekend the bank's chief equity strategist just published his latest forecast, slashing the price target to just 4300.

On Sunday, another Goldman’s chief economist published a note in which he cut GDP growth forecasts for all remaining quarters of the year. Given that we’ve already received a negative GDP print for the first quarter of the year, another negative number in the second quarter would push us into an official recession.

Taking into consideration the outlined figures that are pointing towards a recession and combining it with continuously elevated inflation levels along with the Federal Reserve taking an increasingly hawkish stance, the economic downturn seems more and more likely. Now you might be wondering what that brings to the table when it comes to crypto. Luckily, we’ve got you covered once again, as this is precisely what this blog will focus on. Let’s get right into it!

What is a recession?

Firstly, let’s explain what a recession is. This macroeconomic term refers to an economic decline that lasts for several months (if it lasts for years it’s called a depression). It’s a normal part of a business cycle that follows a ‘boom’ period. During the ‘boom’ period the economy expands, while at the time of a ‘bust’ period it contracts. Few key indicators of a recession are: job losses, manufacturing slowdown, decline in consumer spending  and a decline in real income.

There are several different theories, which attempt to explain why and how the economy falls off of its long-term growth trend and into a period of temporary recession, and how they can be avoided. We won’t get into any details of these theories or argue which is correct and which is not. Instead, we’ll simply focus on dynamics that take place during such downturn and share with you implications it may have on the broader economy (and later on focus on the crypto part).

How do recessions impact businesses?

As the economic downturn puts pressure on businesses’ revenues and profits, manufacturers will look for ways to cut costs. They will stop buying new equipment and  hiring new employees, cut back on funding for research and development, as well as expenditures for marketing and advertising. As the downturn advances businesses eventually start laying off workers and even selling their assets.

As consumers also become wary when it comes to spending (especially those, who helped increase the unemployment number), demand for products and services decreases. This means that businesses might find it more difficult to generate its usual sales, which pushes them towards further cost optimisation and so on. The process basically enters a self-perpetuating cycle that goes on until resources reallocate and the economy restructures and starts growing again.

How does that affect the stock market?

Since a stock market is a forward-looking barometer, whenever investors start to smell that a recession could be on the way, they make sure the risk of it gets priced into assets’ valuations in advance. This means that stockholders will start selling a portion of their portfolio holdings in order to hedge against that potential risk. As a result of this selling, stock’s valuations plunge and new (lower) prices reflect the upcoming economic downturn. When the declining revenues actually start showing up on quarterly earnings reports, it puts additional downward pressure on stock prices. On top of that, once the recession is already intact investors become more risk-averse and are less likely to invest in stocks, which leads stock prices further down.

How can the Fed help?

Normally, when there is a recession on the horizon, the central bank employs various monetary policy tools in order to suppress unemployment rates and re-inflate prices. These tools include open market asset purchases, reserve regulation, discount lending, as well as  forward guidance to manage market expectations. In essence, the Fed basically floods the economy with new credit to ensure businesses can keep on borrowing, while re-inflating assets’ prices and maintaining low unemployment.

Unfortunately the Fed may not come to rescue this time. It looks like the Fed chairman Jerome Powell is more concerned about inflation and will have to hike into a recession in order to tame down elevated price levels. The markets have probably been trading downwards for the majority of the year probably partly as a consequence of this ‘hawkish’ stance from the Fed and partly as a result of potential recession.

What are the implications for crypto?

Even though crypto is an independent market, it’s still interconnected with other markets, including the stock market. Consequently meltdown in one can spill into another and vice versa (the crypto market is

probably big enough). But it’s not just a collapse in the stock market that could trigger a collapse in the crypto market. Bitcoin (and consequently the whole crypto market) has been getting increasingly correlated with U.S. stocks - SP 500 as well as tech-heavy Nasdaq. Recently BTC's 30-day correlation with the Nasdaq reached its highest level since July 2020. 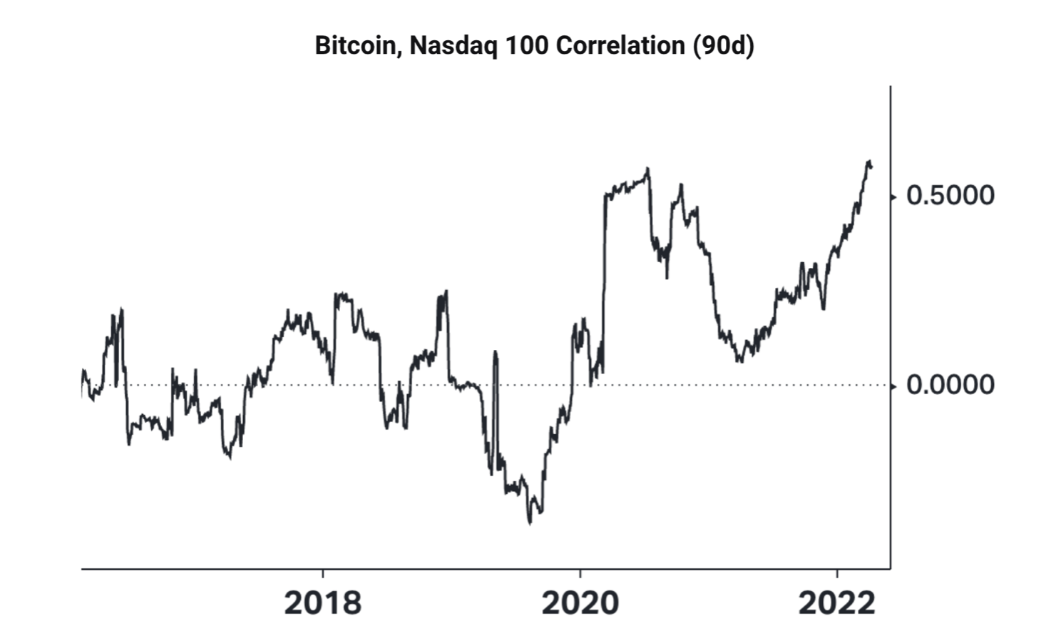 Many analysts expect the major cryptocurrencies to follow the broader market on a short-to-medium term basis, on the upside and downside. Since higher rates hit tech-heavy stocks the hardest, the Fed hiking rates could hit Nasdaq and Bitcoin in the short term, but it’s important to note that Bitcoin possesses the safe haven status in the crypto sphere. This means that to some degree the downward pressure could be offset with liquidity coming from altcoins in case enough investors seek safety in digital gold instead of stablecoins.

As already said, the market is always looking forward, which means that future rate hikes as well as potential recession could already be priced in. In such a scenario the price would have already bottomed out. If that is not the case and the Fed keeps hiking rates into a recession, the carnage in the markets might push the Fed to reverse its hawkish stance and move back to a more accommodative stance, which could end up being a good thing for bitcoin and cryptocurrencies

However things keep unfolding, bear in mind that recessions come and go. While some are more severe and last longer than others, history teaches us that they eventually end, and when they do, a period of economic prosperity follows and we all know which asset tends to outperform them all in times of economic expansion.